City Council Elections by District begin November, 2023. Meridian is required to elect our City Council members by district beginning in the November, 2023 election as we surpassed 100,000 people in the last census. Districting is important in ensuring that each City Council Member represents about the same number of constituents. An independent committee was formed in April 2022 to review census data and other factors to create a proposed map of the six City Council districts. This map was approved by the Committee and subsequently adopted by the City Council on June 28, 2022. Historic Council seat numbers were also aligned with adopted Districts under Ordinance 22-1988, adopted on August 16, 2022. The final map is published here ». Meridian’s District Map was completed by August 2022 to provide potential candidates and voters time to learn about districts and plan accordingly.

Districting determines which neighborhoods and communities are grouped together for purposes of electing a City Council member. To learn more about the districting process, view our interactive map here », or view City Council contact information here ». To learn more about the district commission’s establishing process, view the Districting Committee information here ».

If you have any additional questions, please contact the City Clerk's office by emailing cityclerk@meridiancity.org or calling (208) 888-4433. 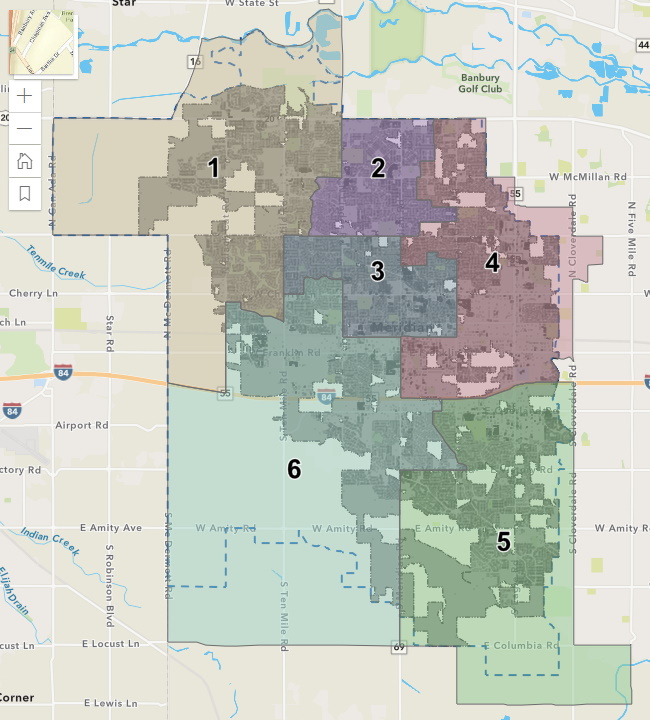